Doesn't he look like Luigi in this fun outfit? We love it! 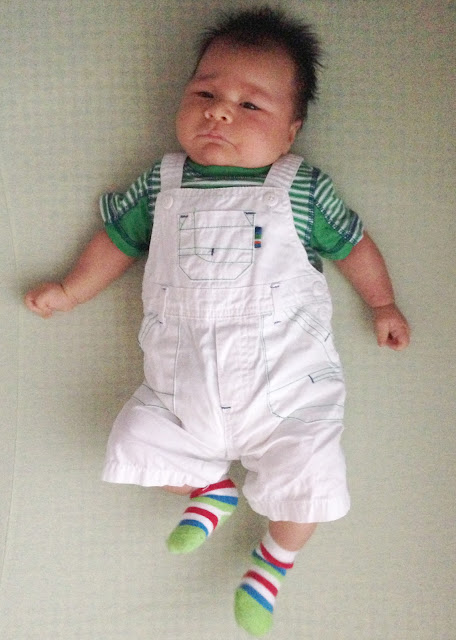 On 6.5 hours of straight sleep (it's no 7, but we'll happily take it!), plus 1.5 hours, plus 30 minutes, plus 1.5 more hours.... What a beautiful face to wake up to each morning! Santi has (fingers crossed that I'm not going to jynx it by mentioning this...) been waking up every day with this beautiful grin on his face. Seriously, it's one of those from-ear-to-ear-to-third-ear (if he had one) type of smiles and it is so adorable (obviously)! We are really seeing him change every single day into a pretty-much-toddler and it's insane how fast it's all moving (it = life). Wow, I use a lot of parenthesis, huh (maybe it's because I could never wrap my brain cells around English class lectures from Elementary school to college, so I lack in the basic knowledge of writing properly. Maybe. Just maybe). 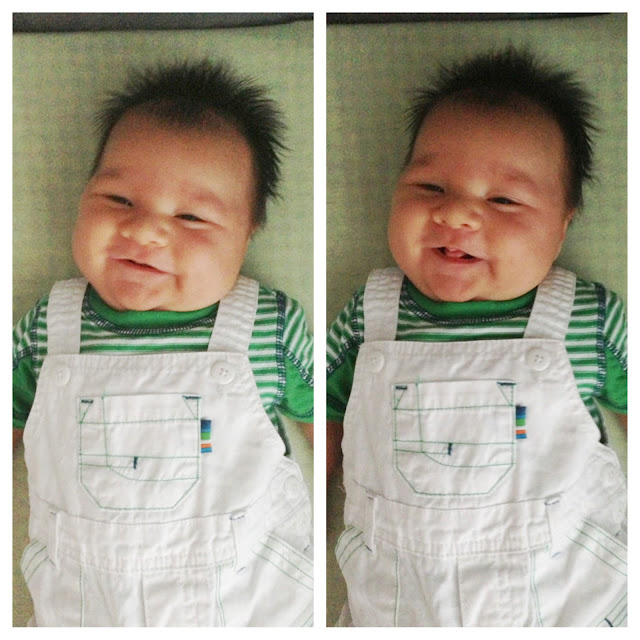 Where was I? Ah, yes, the smiles. It's so fun to interact with this little guy! To say, "buenos diiiiiaaaas!" to him, meaning good morning in Spanish, which I hope you already knew otherwise I will be a little disappointed, and for him to actually know that I am talking to him. When he looks for his papa in the morning, my wanna-be-Mexican heart just melts - it is very clear that he loves his pa dearly and enjoys the mini-moments in the AM, lunch hour and PM in his arms. If only we could fly away to a distant land and just be a family sans so much going on: work, work, work, Facebook distractions, work, work, wooorrkkk. 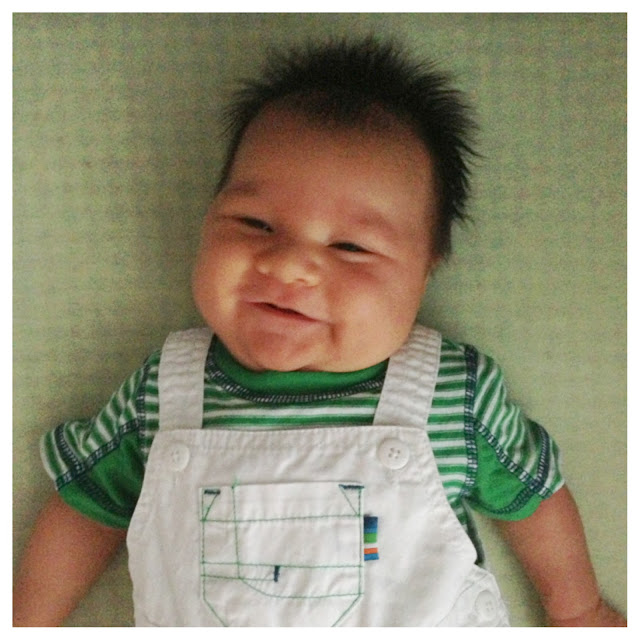 After I put on Santiago's Luigi (hey Mario bros!) outfit, we waited for an early morning guest to arrive. A friend from work stopped by nice n' early to pick up some maternity clothes that I rocked back in my pregnancy days. She had actually given me boxes of hand-me-downs when I was pregnant and I was so thankful for them - I wore something new every day it felt like! That was, until I discovered some favorites, and wore the same 3 outfits every three days, until holes appeared in the armpits (fib) and the colors started to fade (not true) and the hems on the edges started to tear apart (lie). Anywho, we all know how expensive maternity wear is, which is dumb, so receiving and giving gently-used tops and dresses, pants and skirts, is a joyous occasion.

Morning breakfast was the same green deliciousness as yesterday, a new friend that I plan on having every morning as a potassium-loaded wake-me-up: collard greens, bananas (2), apple (1) and water ~ with a handful of almonds and a few prunes. We then had a mid-day visit from a friend from high school that I haven't seen in six years - since we graduated, and she brought her two girls along which was loads of entertainment for this new-mama (me). 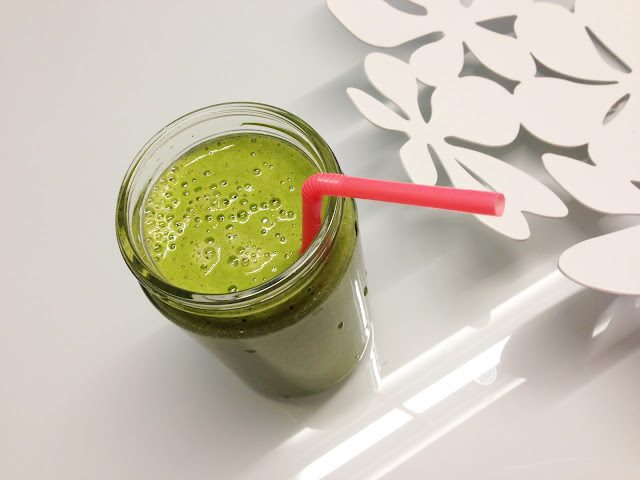 I love having kids over at our house, since it's 100% not kid-proof, and seeing what they do so we can prepare for our unavoidable (and anticipated!) future. So far we have had a 2-year-old (hello sticky fingers on our glass dining room table!), a 18 month old (open Ikea shelving unit doors, grab whatever is inside, repeat... repeat.. run up and down the stairs!), a 3 year old (pull out decorative "twigs" from glass vase and use as a sword on the closest human!), and now a 3.5 and 4.5 year old (jump on couch, fall off spinning bar stool, land on hardwood floor, convince owner of house that you landed on your neck and freak her out... - she just said, "owe" and held her wrist - kids have very high pain tolerance!). And now we have this little 7 week old monkey, just memorizing all the parts of the home so he can soon destroy each inch - in an ever so innocent and loving way!

Lunch was leftover lentil n' rice soup with avocado and Mary's Gone Crackers - woah filling. I need to scale down on the portions, mama! While I carefully ate soup, Santiago ate milk. Bonus points for not spilling any food on him today! To the day I have dropped: ground flaxseed, frozen berries, pasta sauce and oats on him as he breastfeeds. I'm not a professional eater-while-baby-is-attached-to-you, yet, but I have hope for a successful future, indeed. 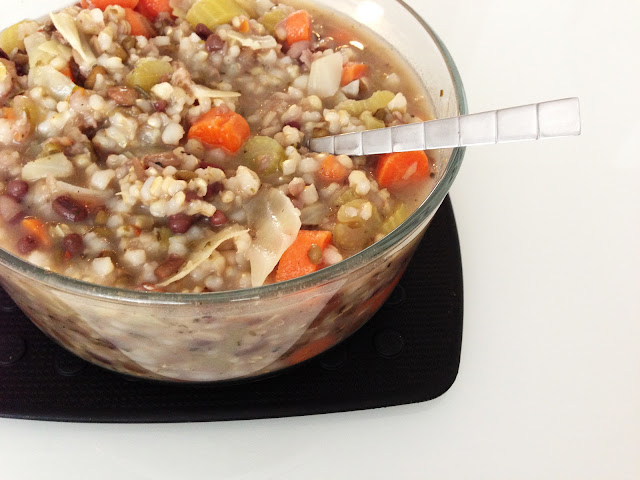 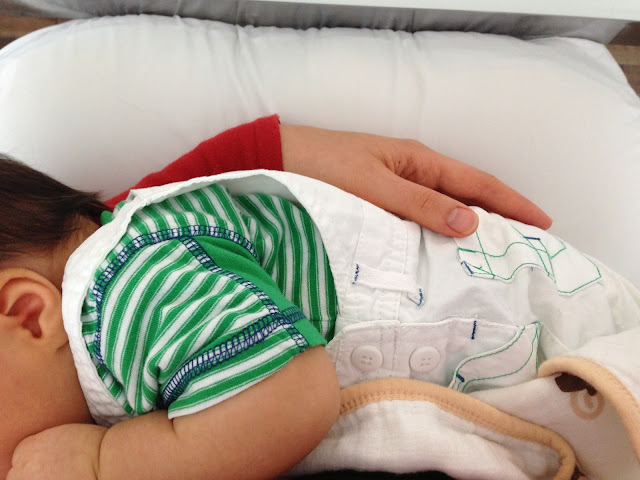 Oh, goofy moment! So, my friend and I never really had a set time for when she was going to visit. I just mentioned, "anytime before 2pm" since that's when I start preparing Eduardo's lunch. So I had actually just taken my soup out of the microwave, placed it on the table for its photoshoot, attached baby to the milk-makers and sat down when the doorbell rang. I then attempted to get up (with baby still eating) and put my huge glass bowl of soup back in the microwave (to hide the awkward fact that I had just sat down for a meal) and walked to the door with baby on me. After a few hours of visiting, the girls left and I went back to the soup - re-heated it (dangerous?!) and had myself a fussy baby. He had eaten a full meal while my friend was over, so I knew he wasn't hungry, this means he wanted to play. But mama had to eat lunch or I would surely fall to my knees from being so hungry. So what did I do? I held him in one hand, he sat against my hip and I shook a rattle and sang - all while I ate my soup standing. Soon enough his fussiness stopped and I look over at my baby to find him completely asleep! I thought it was amusing, seeing as how I can never get him to sleep by just swaying back and forth and shaking a rattle while I held him. I'm glad I caught it on camera otherwise I would never remember this moment 20 years down the road when I have 12 more kids and no memory. 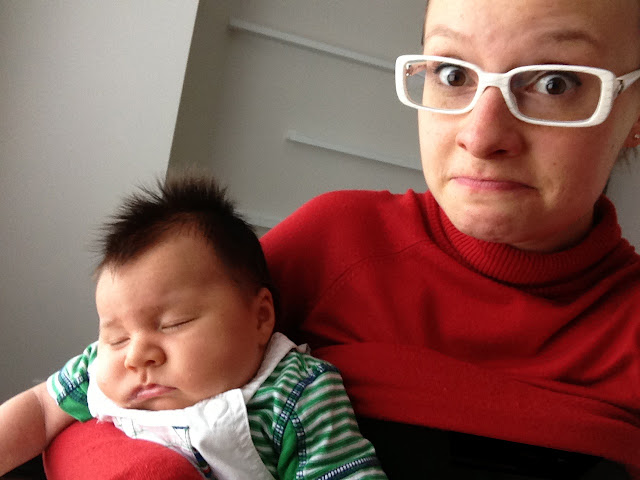 Later we had more blended fruit (purple kale, orange, lemon, banana, ginger, pineapple, beets) and danced and sung around the living room. We even had a recording session with the iPad's camera in the living room - I don't want to forget any of these moments so I try to record as much as possible, and take waaaayyy too many photos. The camera followed us upstairs as we had a diaper change, we showed off our sheep mobile's magic to make a fussy Santiago into a joyfully distracted Santiago, we played with a playmat and a singing, lighting-up kitty, and then came back downstairs to watch ourselves on the camera. Santi loves seeing himself in mirrors, which we don't really have any of so I really refer to iPhone and iPad "back" cameras where you can see yourself as you snap a photo or video. He just staaaress at his reflection, mesmerized by its beauty (duh). And it makes for a really cute video! I'd post one, but that requires more work than I feel like at the moment (re: upload video to computer, edit video in Sony Vegas, upload to YouTube, post to Blogger - hello 4 hours of non-stop work and uploading! maybe I'll have time for you another day..). 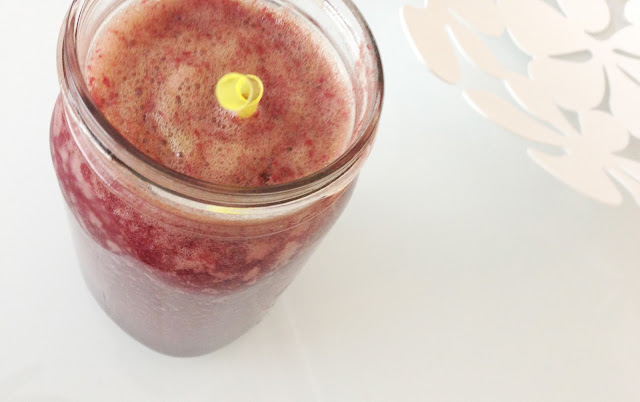 Then gma and gpa Matthews came over and played with Santiago, who went into "only eat and sleep NOW" mode for them, so they didn't really end up playing much. My papa kind of watched while my mama tried to shush and rock the sleepy child to sleep, without much success. But at least she got to hold the little guy, which is all she waits for each evening - they both love seeing his sweet cheeks, even if he's a fussy version of his cute self! And I love, love, love, having them over - it's a breath of fresh air each night! Er, it's fun to be with adults, is what I mean. Theeeen papa came home and we got monkey in his pj's, ate chocolate smoothies with cereal on top, and called it a night. 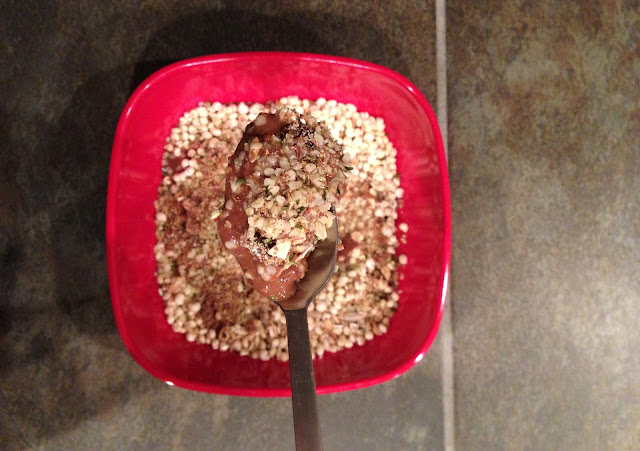 Papa Edu got his little babe to sleep, again with awesome padre skills - he's done this for the entire week, I'm so proud of him!! - and tomorrow I'll tell the great world how many wonderfuuuulll hours he slept for! 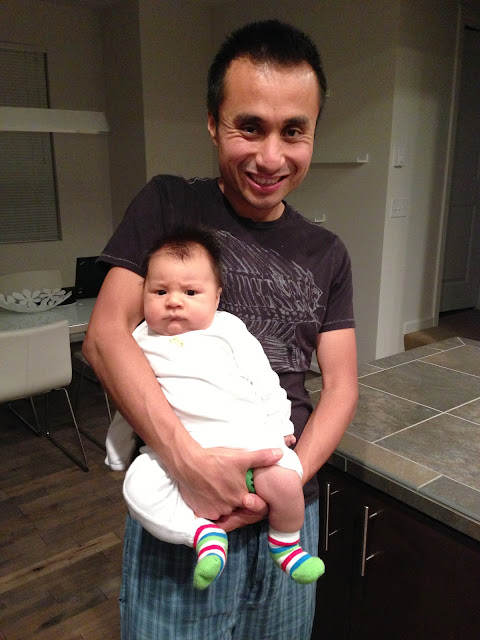 The Lord is a stronghold for the oppressed, a stronghold in times of trouble. And those who know Your name put their trust in You, for You, O Lord, have not forsaken those who seek You. Psalm 9:9-10
by Nicole Carrillo at 8:16 PM

Nicole Carrillo
A follower of Jesus Christ, praying He uses me for His glory and not my own in the short time He has me on this earth. Wife. Mama. Plant eater.